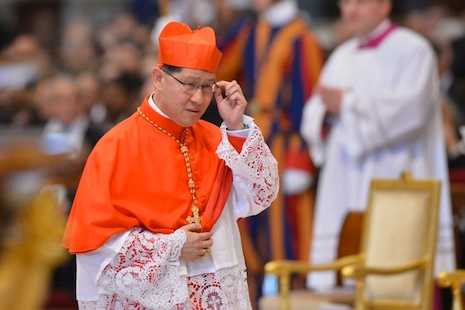 During his homily at the consistory Mass, Pope Benedict focused on the meaning of the word "catholic," a word, he said, "which indicates an essential feature of the Church and her mission."

"What makes the Church catholic is the fact that Christ in his saving mission embraces all humanity. While during his earthly life Jesus’ mission was limited to the Jewish people, 'to the lost sheep of the house of Israel' (Mt 15:24), from the beginning it was meant to bring the light of the Gospel to all peoples and lead all nations into the kingdom of God."

It is by following Jesus, the Holy Father continued, "by allowing oneself to be drawn into his humanity and hence into communion with God, that one enters this new kingdom proclaimed and anticipated by the Church, a kingdom that conquers fragmentation and dispersal."

"The universality of the Church flows from the universality of God’s unique plan of salvation for the world. This universal character emerges clearly on the day of Pentecost, when the Holy Spirit fills the first Christian community with his presence, so that the Gospel may spread to all nations, causing the one People of God to grow in all peoples. From its origins, then, the Church is oriented kat’holon, it embraces the whole universe."

In light of Pentecost, the Pope continued, the universal mission of the Church "does not arise from below, but descends from above, from the Holy Spirit: from the beginning it seeks to express itself in every culture so as to form the one People of God. Rather than beginning as a local community that slowly grows and spreads outwards, it is like yeast oriented towards a universal horizon, towards the whole: universality is inscribed within it."

Apostles and disciples of the early Church "set off without any human security, purely in the strength of the Holy Spirit, the Gospel and the faith. This is the yeast that spreads round the world, enters into different events and into a wide range of cultural and social contexts, while remaining a single Church."

"The Church is one, holy, catholic and apostolic, she reflects in herself the source of her life and her journey: the unity and communion of the Trinity."

Speaking with regard to the consistory, Pope Benedict explained that "the perspective of the Church's unity and universality is the College of Cardinals: it presents a variety of faces, because it expresses the face of the universal Church."

Speaking to the cardinals, Pope Benedict concluded: "From now on, you will be even more closely and intimately linked to the See of Peter: the titles and deaconries of the churches of Rome will remind you of the bond that joins you, as members by a very special title, to this Church of Rome, which presides in universal charity. Particularly through the work you do for the Dicasteries of the Roman Curia, you will be my valued co-workers, first and foremost in my apostolic ministry for the fullness of catholicity, as Pastor of the whole flock of Christ and prime guarantor of its doctrine, discipline and morals."